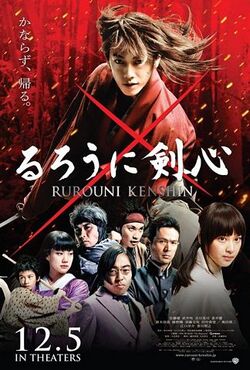 Rurouni Kenshin (るろうに剣心 Rurōni Kenshin?) is a 2012 Japanese film adaptation of the manga of the same name originally written by Nobuhiro Watsuki. Directed by Keishi Ōtomo, the film stars Takeru Satoh and Emi Takei. The film focuses on fictional events that take place during the early Meiji period in Japan, telling the story of a wanderer named Himura Kenshin, formerly known as the assassin Hitokiri Battōsai. After participating in the Bakumatsu war, Kenshin wanders the countryside of Japan offering protection and aid to those in need as atonement for the murders he once committed as an assassin.

Rumors circulated of a live action adaptation of the manga before it was announced. The Sankei Sports newspaper adds that the staff aims to release the film internationally and eventually make a series. This will be the first live-action adaptation of the manga. During the production, Nobuhiro offered his ideas for the movie, which were used in the filming. The film was distributed internationally by Warner Bros.

Rurouni Kenshin was theatrically released on August 25, 2012 in Japan, grossing over $36 million in that country and over $60 million worldwide as of November 2012. It was released in DVD on December 26, 2012. The film has been licensed for distribution in over 60 countries in Europe, Latin America and Asia. The movie premiered in North America as an opening selection for the 2012 Los Angeles Eiga Fest in December 14, 2012.

ONE OK ROCK song The Beginning chosen to be official soundtrack of this movie.

Retrieved from "https://oneokrock.fandom.com/wiki/Rurouni_Kenshin_(2012)?oldid=5038"
Community content is available under CC-BY-SA unless otherwise noted.