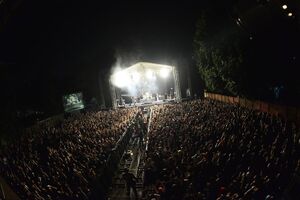 This gig is a part of WHO ARE YOU?? WHO ARE WE?? TOUR and their first time gig in Jakarta, Indonesia. They perform all out and make 3000 audiences satisfied.

As usual, all of ONE OK ROCK's member spoke in Bahasa Indonesia to entertain the audiences before Answer is Near.

Retrieved from "https://oneokrock.fandom.com/wiki/Jakarta,_Indonesia_(2013)?oldid=5138"
Community content is available under CC-BY-SA unless otherwise noted.