This gig is a part of ONE OK ROCK first United States Tour in 2014 and finished that tour. Their dream became true after playing at this venue.

For their previous various interview, ONE OK ROCK dreams is to have a chance to play a gig in USA. Before WHO ARE YOU?? WHO ARE WE?? TOUR starts, ONE OK ROCK finnaly announces their first concert in United States, including two venues in New York and Los Angeles. Despite their concerts starts in February, ONE OK ROCK already arrived in Los Angeles at June 12, 2014. Then revealed they going to recording album in that country, together with their producer John Feldmann. 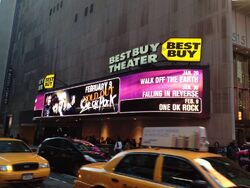 Their tickets in Best Buy Theater already sold out 2 month before the dates.

Retrieved from "https://oneokrock.fandom.com/wiki/Best_Buy_Theater,_New_York_(2014)?oldid=6244"
Community content is available under CC-BY-SA unless otherwise noted.