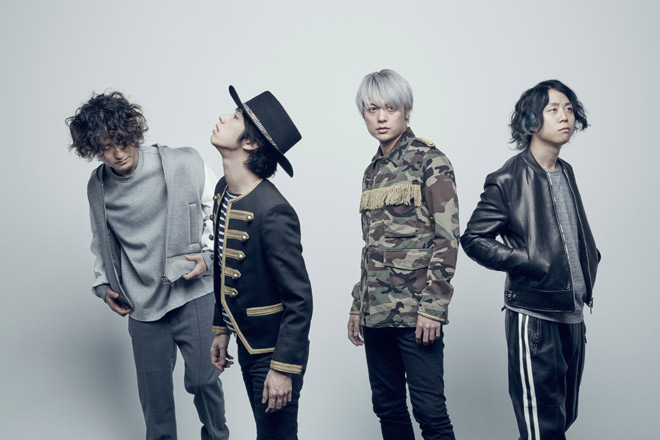 How do you feel after finishing up your new album?Edit

Taka: "I thought to myself, thank God we were able to finish it. I want to give myself a pat on the shoulder. But since we recorded under the beautiful weather of LA, it wasn’t that difficult for us. We were able to relax during the recordings. We all love the sun so it was helpful for us to record in a different environment like LA."

Not just the recordings but also you were all touring around the US and you performed at Warped? Do you have any interesting stories to tell about Warped? Edit

Taka: "Ryota can’t drink alcohol at all. But didn’t the other bands make you drink a lot during Warped?"

Ryota: "That's right. I think I drank more alcohol than I have ever drunk in my whole life during the month of Warped. It was pretty hard for me. Every night, BBQ dinner started after the show and that was when we all became friends. I thought it was important for me to get connected with other bands so I tried my best to drink with them. Fortunately, I did make many friends and I enjoyed the tour so it was alright but I don’t have any memory of being on the bus!!"

Toru: "While we were touring, we had to use the shower on the bus. You know how the amount of water we could use is limited, right? We had around 12 people on our bus and the person who got to shower first would use the water without thinking anything so guess what happened? Once when Ryota was the last person to shower, the water stopped while he was shampooing his hair!"

Ryota: "I was in a shock and I was freezing while my hair was all bubbly. I had to ask someone to bring a bottle of water and rinse it. That was a very severe experience."

Music and fashion are considered related but do you all think your band image is somehow related to fashion?Edit

Taka: "There are some bands that are very connected to fashion but I don’t think we are. We always wear black. I personally like the color black so I only have black items anyway."

Toru: "We did not have a costume meeting for our gigs but we realized we all chose black in the end."

Do you have any stylist during your live tour?Edit

Taka: "We sometimes ask, when we perform at big arenas but we choose our own clothes most of the time."

Who is most fashionable? Edit

Tomoya: "I think it is Ryota?"

Ryota: "No, no! I think everyone here is fashionable. I just like to wear baggy clothes so I just 'look' fashionable."

Taka: "He doesn’t like to play it safe. He is always adventurous and they all suit him well."

Ryota: "No, no! Skinny clothes don’t fit me right. I have a huge head so I try to cheat by wearing baggy clothes. I don't think I can wear any skinny clothes anymore."

Ryota: "I wear skinny clothes, when I have to pump up myself but I cannot wear them for a long time. I usually wear something that I can be active in and be different from others."

How do you all decide on something, when all of you have different opinions? Edit

Taka: "Maybe we are patient with each other but our opinions are usually similar. All of us are thinking about the band very deeply so we do not clash with each other that often."

Ryota: "I have clashed with Taka once."

Ryota: "We were all used to live in a dorm so when I actually decided to get a room by myself, I felt very lonely.Then I asked Taka to live with me but he was like "NO WAY. I CAN'T."

Taka: "But that is not anything to do with music!From living together in LA for our recordings, I realized I will be cooking,cleaning, and doing everything that is to do with housework if we lived together. This is why I didn’t want to live with him. I think it was avery correct decision that I made."

I heard all of you used to gather at the studio around 1a.m., but what are you usually doing around that time now? Edit

Tomoya: "I don’t watch TV that often but there are some TV shows that I record every week so I am usually watching those. I was not in Japan last year most of the time so I was so excited to go back and watch 'Ame-talk'. I read mangas too."

Toru: "You are either reading mangas or watching TV,right?"

Taka, you said you watch DVDs but what was your favorite one recently? Edit

Taka: "I re-watched 'The Shawshank Redemption' recently and I love it."

Ryota: "I have something to recommend too!"

Taka: "You looked like you wanted to say something!"

Ryota: "My all-time favorite was The Girl with the Dragon Tattoo but Gone Girl was so interesting. It was definitely the best movie I’ve watched recently. You guys have to watch it."

Ryota: "Gone Girl is way beyond that. It was so scary. The ending was just like…"

Everyone: "Wait don't say it! We might watch it in the future."

Ryota: "You guys all say that all the time but you guys never will."

Tomoya: "It’s not a movie, but the manga Bokura wa ita was very touching. I personally like short series more than the long ones and I thought it was pretty long at first but I could not stop crying for like30 minutes after I finished reading it."

Toru: "His eyes were so puffy, when I went into his room."

Tomoya: "I haven’t cried that much in a while. Do you have any recommendation, Toru?"

Toru: "I cannot think of anything right now."

Tomoya: "You watch so many movies though! Everyone calls you like the movie master."

Toru: "You’re the only one who’s calling me like that. I have not watched anything recently but I was so into the TV show Walking Dead. I like horror and suspense shows and I was watching that through my phone during our tour."

Retrieved from "https://oneokrock.fandom.com/wiki/2015.03.17_-_ONE_OK_ROCK_in_Vogue?oldid=6155"
Community content is available under CC-BY-SA unless otherwise noted.